It’s been over a month since I started singing/whistling to Rover to associate specific songs with specific activities.  I’m doing it partly to support giving him the ability to let me know what he wants, and partly because I am curious how well he can distinguish songs.  I promised myself I’d give him two months to show signs of recognizing specific songs, but the initial results are…inconclusive at best.

He has always shown an interest and curiosity when I sing, when I whistle, or when he hears melodic birdsong.  This is accompanied by an open, slightly seeking posture, rather than a tense, defensive posture, so I interpret it as an enjoyable stimulation.  He definitely reacts more strongly to some pitches and timbres than others.  I’ve even found that he reacts more strongly to some melodies by the same artists, with similar range, all sung by me, but I haven’t been able to pinpoint the characteristic that most impacts his interest.  He will even react (to a lesser extent) to recorded music, while completely ignoring recorded voices.   So there’s definitely some more sophisticated aural perception than you might expect in a not-terribly-social species that’s about as vocal as a Trappist monk.  But that doesn’t mean he can recognize 8 bars of a specific melody when he hears it over and over, nor that he can distinguish it from two other melodies that he hears in different contexts. 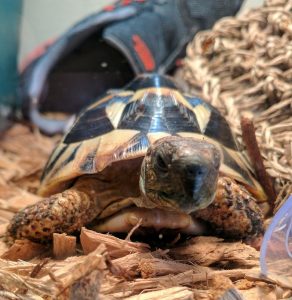 After more than a month of this experiment, I find that he is slightly more likely to stop and listen when I sing or whistle, but he does not react like he’s anticipating something he likes (food, back rubs, teleportation to a nice place to stretch his legs).  In fact, it’s even weirder than that.  He previously developed a very logical way of letting me know he’s hungry: standing in his food dish.  I think this has more to do with being there as soon as food arrives than it does with informing me of his need, but I can’t disprove a more intelligent reason.  If I happen to glance over and notice he’s standing in his food dish, I go get some food and start singing shortly before I deliver the food.  As soon as I start singing, he stretches his neck out, takes a couple steps toward me, and watches me.  He continues to do this after food is laid near him!  He won’t eat until I’m done singing!  Sigh.

In short, I’m not sure this experiment is having the desired result, but I am at least learning something.  Rover’s not inherently built to adopt the social concepts and associations I’m trying to instill, and reptiles are not the swiftest learners, so I’ll keep it going for another month before I decide what exactly it is that I’ve learned.