I have a dream that one day Rover will be able to let me know what he wants.

He’s not much into verbal communication, so currently he just clamors for service by pushing against the terrarium glass in my direction.  I can never be sure what he’s requesting.  A back rub usually calms him down, and if it doesn’t I move him to a new location where he can go for a stroll and work off some energy.  It’s hit or miss.  When he’s hungry and there’s no food yet, he just hangs out near his empty dish quietly.  This is not an ideal way to notify me that I’m late with breakfast. 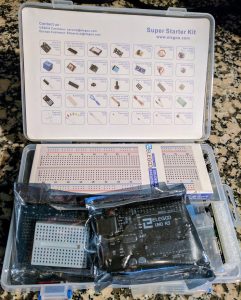 Sure, it’s many months down the line, but I’ve already got the kit so I can start building when I find the time!

My ultimate vision involves him pressing buttons, shifting levers, or triggering weight sensors, each of which is associated with a different request.  These items will then make a sound and/or email me to let me know he wants a specific thing from me.  There are some things I need to work on first, though:

In other words, constructing a series of steps that could ultimately lead to Rover ringing for service requires a lot of planning, a good deal of time spent on each experimental stage, and a lot of flexibility at each stage depending on the outcome of the previous stage.

Although Rover doesn’t vocalize, he listens intently to high-pitched singing and whistling, and he does seem to listen more intently to some songs than to others, implying he can distinguish melodies.  I have no idea how refined his auditory processing is, but it seems reasonable to assume that if I select easily distinguished ditties to associate with the services I provide, he should be able to catch on.  Later I can associate those ditties with the electronic triggers, making it easier for him to catch on.

Selecting a song mapping that works for me and my tortoise

Picking songs for this stage seemed quite tricky initially. I had to find songs that I know well enough to sing/whistle without hesitation, but that I don’t randomly sing without noticing—and also that I can still whistle reasonably well if I’m sick.  Oh, and I have to easily associate them with the activities so I don’t mix them up.  After the recent announcement that Animaniacs would return, I found myself watching some episodes and realized that Warner Brothers has mostly solved this problem for me!  So I selected three easily-distinguished tunes:

“Shortnin’ Bread” is an easy and obvious mapping, but I may have some trouble with it.  It’s a bit of an earworm for me, such that I sometimes hum it randomly when I’ve heard it recently.  I’ll just have to stop myself, and if it becomes a problem I’ll find a replacement song.

I am not sure how long it will take to make this association firm in Rover’s mind, but fortunately this isn’t a formal experiment.  After a month or so I intend to start singing/whistling earlier and earlier in anticipation of the service I will be providing, and watching for a change in reaction.  If he looks more excited when I announce that food/backrubs/teleportation is on the way than he does when I simply approach the terrarium, I’ll know he’s starting to associate the tunes with the services.  If that time never comes, I’ll have to find a different intermediary and restart step 1.