Running out of cork boards

Rover’s had a second story in his terrarium since last summer.  He was growing rapidly and my flatmate was getting rid of some cork boards that happened to be approximately the same in one dimension as the terrarium.  The idea seemed obvious at the time.  The second story is around half the area of the first floor, but it adds more than 50% to Rover’s amusement, because he just loves climbing and hanging out on ramps.  He adores having a second story.

Unfortunately, these cork boards get soiled and scratched up.  I only have one fresh one left.  I’ve also noticed that the little green man doesn’t spend as much time in the area below the cork boards as he used to, presumably because the board blocks most of the light to that area.  He doesn’t dislike the dark, but it’s not as appealing as lighter areas with better access to the UV lamp.

I decided to replace the boards with something that allowed some light through.  Plexiglass (or equivalent) was my first thought, but it’s far too slippery.  My next thought was that he loves the lizard hammock I use as a ramp, so maybe a coarse fiber mesh would work—and would definitely feel more like the grasslands to him.  A ton of macramé yarn was gifted to me a while ago.  I didn’t know how to macramé, but I heard it’s not very difficult to do a basic hammock pattern.  Turns out that’s true!

I made a frame out of PVC pipes and churned out my first macramé project in a couple hours, while watching TV and taking frequent breaks to do chores.  A nice leisurely afternoon project.

I wanted to use the narrowest yarn I could get away with so that more light would shine through.  For the first version, I knew immediately that I’d used too small a yarn for his now-big feet, but I expected to have to frog my first macramé project and make a better one based on what I learned.  I also cut my yarn just a few inches longer to make the double half hitch easier.  I wanted my buddy to be secure.  For reference: I originally cut the yarn strips 4x the outer width of the frame.  Ultimately I cut the yarn around 4.3x.  YMMV.

The cork boards stood on pillars, but this frame I hang from hooks.

Rover was understandably hesitant the first day.  He kept very low, peered for several seconds in the direction he wanted to move, and then slowly, cautiously moved his foot.  He backed himself onto the frame several times for perceived safety.  I decided to speed up the acclimation by weaving some mostly-translucent ribbons through the ropes.  They were just temporary, so I only secured them with scotch tape.  He immediately felt more secure, even though they provided no actual support.  By the third day ribbons had started to fall off and he didn’t care, so I removed them.  Now he patrols his borders like normal, wanders nonchalantly, and feels comfortable napping on the second floor.  I saw a foot slip through once, and he wasn’t phased at all.  Success! 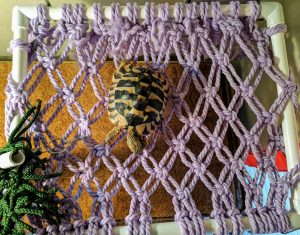