I recently bought an insect toy for Rover. I removed the fluffy cat-attracting bit, set them both on the bathroom floor and closed the sliding door. Rover finds it noteworthy when it passes by, but they leave each other to their explorations. 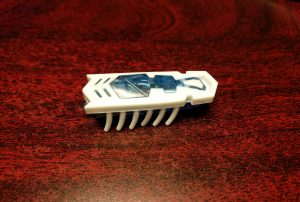 Today I learned just how insect-like the little thing could behave, as it wended its way almost immediately across the bathroom floor and into the sliding door’s recess.

By the time I grabbed my needle-nose pliers, it had jiggled past the door’s resistance and retreated too far to reach. I had to close the door to see the “insect” through the gap.

I tried my longest knitting needles, which were quick to hand, but those were too rigid for the angle I had to deal with, even though they had the reach. The “insect” wandered even farther in. I could no longer see it, so I had to search for something that had full reach and some bendiness. Jewelry wire came to mind because it’s narrow and I could easily hook the end, but my thickest one isn’t very strong extended farther than a foot.

Turns out an extendable measuring tape, though it takes some wriggling to get the end between the door and frame, is the correct tool for this retrieval job. The wayward “insect” has now been rinsed, and I’ll find a way to block that path next time (while still being able to move the door…probably a fence/wall). But at least I know how to get the thing back out if I fail.

So far I’ve gotten far more amusement and life enrichment out of this toy than Rover has.